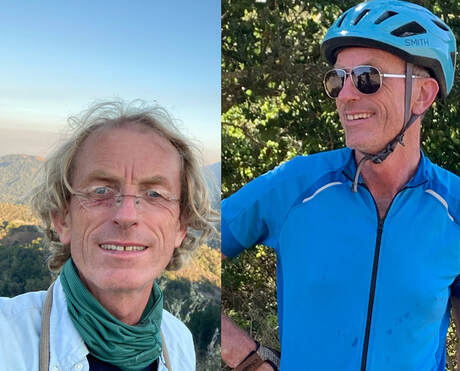 ..The Proust Questionnaire was a game that French novelist Marcel Proust would play at his parties. He felt a person would reveal their true nature in how they answered. We're asking it with a cycling twist to your fellow TVC members so you can get to know them a little better.​

Describe yourself in ten words or less.
Optimist from Amsterdam, self-sufficient to a fault, passionate about nature.

What is your idea of perfect happiness?
Sitting on a doorstep on the edge of a canal in Venice in the late afternoon with my wife Gaby, drinking Prosecco and eating antipasti from a small local enoteca.

What is your greatest fear?
Cancer, especially among my loved ones but also myself.

What is the trait you most deplore in yourself?
Laziness and procrastination.

Which living person do you most admire?
Barack Obama

What is your greatest extravagance?
Having four cars and two houses.

What is your current state of mind?
Relieved.

What do you consider the most overrated virtue?
Self-sacrifice. (Remember to put on your mask first before helping others...)

On what occasion do you lie?
To keep people from harm.

What do you most dislike about your appearance?
I think I am too skinny.

Which living person do you most despise?
I don't really believe in despising people, but probably dislike Mitch McConnell the most.

Which words or phrases do you most overuse?
Don't worry.

What or who is the greatest love of your life?
My wife Gaby.

When and where were you happiest?
When I traveled through Italy every summer with my friends or my sister in my early twenties. Just landing in Rome or Venice (or getting off a train there) still makes me irrationally happy.

Which talent would you most like to have?
I would love to be able to play a piano well. Like Bill Evans or Keith Jarrett.

Where would you most like to live?
Perfectly happy in Marin. I’ve lived a lot of different places and I hope this is my final destination.

If you could change one thing about yourself, what would it be?
I would like to be better able to feel and respond to other people's challenges and needs.

What do you consider your greatest achievement?
Designing my own house. It is an amazing feeling to stand in a space you drew on paper two years earlier and have it work and feel the way you intended.

If you were to die and come back as a person or a thing, what would it be?
Going back in time it would be nice to come back as a successful and talented architect, like Gerrit Rietveld or Mies van der Rohe. Going forward, I wouldn't mind just being a younger version of myself.

Where would you most like to live?
Right here in Fairfax!

What is your most treasured possession?
My health.

What is your favorite occupation?
That is hard to choose. Some combination of hiking, bicycling, snorkeling, sailing, and eating/drinking.

What is your most marked characteristic?
I look and sound Dutch.

What do you most value in your friends?
Togetherness.

Which historical figure do you most identify with?
Thoreau.

Who is your hero of fiction?
Hermione Granger

Who are your heroes in real life?
The people who protect sea turtles and marine mammals.

What is it that you most dislike?
Stupid maliciousness or malicious stupidity (hard to know the difference sometimes).

What is your greatest regret?
Not having spent a few years living in Italy before moving to the U.S. in 1989. I was too focused on becoming financially secure to take the time to find out what it would be like to live in the place I love most.

Favorite ride fuel?
Pie (it worked very well on my first ride over 50 miles a couple of weeks ago).

What is your motto?
Everything will be alright.

Sunglasses under or over helmet straps?
Under.

Any lucky charms, stuff or ritual?
Parking my old cars pointing downhill, in case they won't start. (This is why I prefer stick shift.)
UA-234066323-1